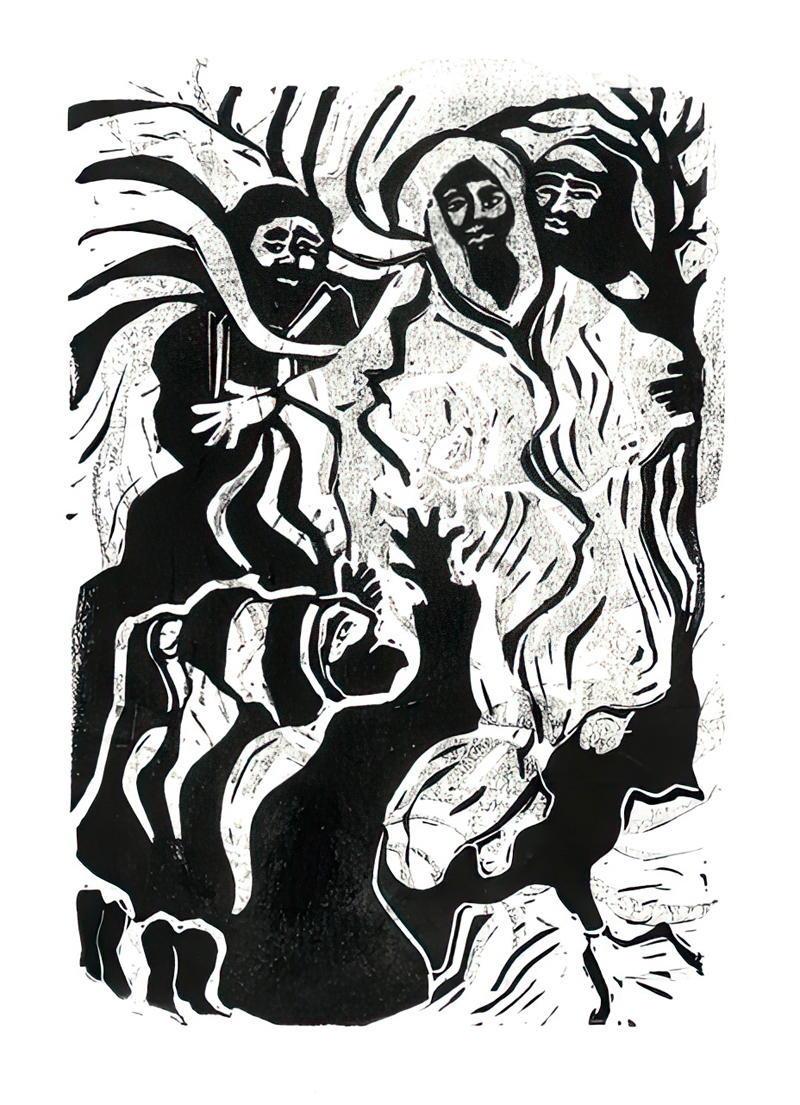 Have you ever experienced a “defining moment”? Perhaps your life was forever changed by a marriage proposal, news of a serious illness, or a job offer. Certainly, our understanding of the world was dramatically altered by the 2020 murder of George Floyd and by the 2001 attacks on the World Trade Center and Pentagon. It’s often the case that we best understand the real significance of events like these in retrospect.

Surely the transfiguration of Jesus was a defining moment for Peter, James, and John—although they clearly missed its significance in the moment. It is also a defining moment for us who hear the Gospel story. In his version of the good news, Luke allows us both to witness the event of the transfiguration and to understand its rich meaning more deeply by the way he weaves together its various elements.

Jewish readers of Luke’s time would immediately have recognized similarities between the Gospel writer’s account of the transfiguration and the story of Moses that we hear today from the book of Exodus. Like Moses, Jesus climbs a mountain, where he takes three of his closest disciples to pray, but more importantly, where he is about to have an intimate encounter with God. Luke is setting up his readers to expect something momentous—and as the story unfolds, he delivers.

When Moses returned from the mountain after conversing directly with God, his face was so bright that he needed to wear a veil over it to protect people from its piercing light. Similarly, as Jesus entered into prayer on the mountain top, both his face and his clothing became radiant, and the disciples received a glimpse of the divine glory in which he already shared. Moses of course was reflecting the light of God that he had merely glimpsed, while Jesus radiated a glory that he himself possessed because of his intimacy with God. Jesus was unchanged; just his appearance was altered, offering the disciples a foretaste of the glory that he would reveal fully only after his resurrection.

Luke tells us that as he was transfigured, Jesus was conversing with Moses and Elijah. The topic of conversation? They were speaking about his “departure” (NRSV) or “exodus” (RNAB). The disciples are clearly not listening in on the conversation. Peter changes the subject and suggests building tents for Jesus, Moses, and Elijah. The voice from the cloud, however, redirects their attention to what Jesus is saying: “This is my Son, my Chosen; listen to him!” (Lk 9:35) Even then, they were simply unable to grasp the message; indeed, “they kept silent and in those days told no one any of the things they had seen” (9:36).

Significantly, the transfiguration marks a turning point in Luke’s Gospel. Jesus’ Galilean ministry comes to an end as he now begins the meandering journey to Jerusalem, where he will suffer, die, and rise. As he set his face toward Jerusalem, this same Jesus whose glory was seen by the disciples would continue his mission of teaching and enacting the compassion of God. Only later would the disciples understand this defining moment in their journey with Jesus and realize that the light of glory that they beheld on that mountain was inseparable from Jesus’ mission and from the Passover that he would undergo through suffering and death.

On this last Sunday after the Epiphany, we reflect on yet another manifestation of Christ, and a dramatic one at that. As we prepare to begin the season of Lent later this week, we are invited to journey with Jesus to Jerusalem, to become like him in extending God’s compassion and reconciliation to others and by following him on the way of the cross. As we walk this journey, we can draw hope from the transfiguration, this defining moment reminding us of the glory that awaits us. If our minds and hearts are open, we can detect the glory of Christ that shines even in moments of darkness and discouragement.

A Hymn for Today: “Jesus on the Mountain Peak”

British minister and hymn writer Brian Wren, FHS, wrote the original version of this text, “Christ upon the Mountain Peak,” in 1962. It was only his second published hymn. Later in his career, after Wren moved to the United States, he revised this and some of his other early texts in light of language changes and deeper theological reflection. It is a marvelous hymn of praise to conclude the Epiphany season and to ring out joyful alleluias one last time before the beginning of Lent.

Jesus on the mountain peak
stands alone in glory blazing.
Let us, if we dare to speak,
join the saints and angels praising.
Hallelujah!

Trembling at his feet we saw
Moses and Elijah speaking,
All the prophets and the law
Shout through them their joyful greeting.
Hallelujah!

Swift the cloud of glory came,
God proclaiming in its thunder
Jesus as the Son by name!
Nations, cry aloud in wonder!
Hallelujah!

This is God’s beloved Son!
Law and prophets sing before him;
first and last and only One.
All creation shall adore him!
Hallelujah!