A DIFFERENT KIND OF KING – Reign of Christ / Christ the King, Year C 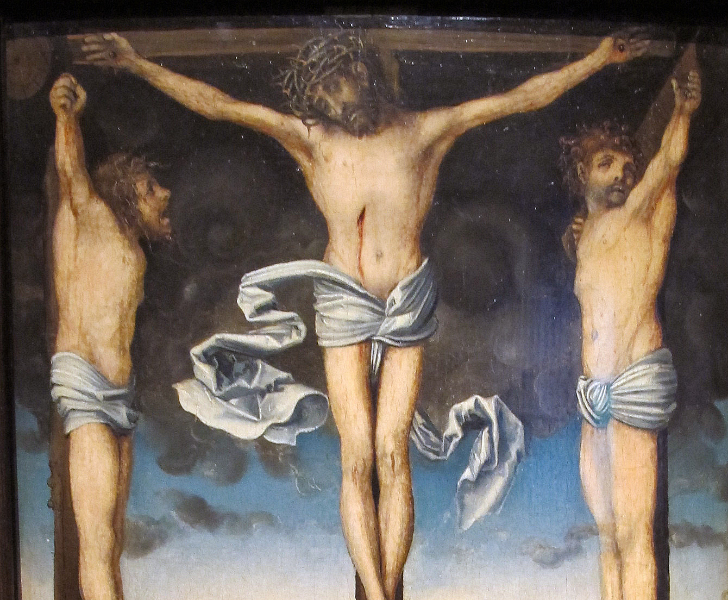 We’ve heard a lot about royalty in the news over the past few weeks. Much of the world was watching during the days following the death of Queen Elizabeth II, days that were marked by processions, public viewings, and funeral rites. Following her death and the accession of her son, King Charles III, to the throne, there has been discussion about whether the British monarchy still has a meaningful place in modern life along with reflection on its deep involvement in colonialism and subjugation.

As we celebrate the Reign of Christ on this last Sunday of the church year, we are reflecting on a rule that is neither based on military conquest nor expressed with the formality and pomp of European monarchies. Yet the sovereignty of Christ is clearly an important theme in the New Testament. The Lectionary readings for today include two New Testament passages that speak of Christ’s reign and kingship.

Today’s Gospel reading concludes our year-long journey through the Gospel of Luke. Right from the beginning of Luke’s account, Jesus is found among the poor, the outcasts, the sinners, and the marginalized. He is born into a poor family in an occupied country. His birth is revealed not to religious elites at prayer, but to grimy shepherds in the fields. Yet an angel announced to Mary not only that she would become the mother of Jesus, but that her son “will reign over the house of Jacob forever, and of his kingdom there will be no end” (Lk 1:33).

Today’s New Testament readings point to the paradox of Christ’s reign. In the Gospel reading, we hear a portion of the crucifixion account from Luke’s Gospel. Throughout his entire life and ministry, and even in his death, Jesus was associated with people at the margins. He was crucified between two thieves and subjected to a cruel and humiliating form of execution reserved for insurrectionists and common criminals of the lower class.

The Roman executioners mock Jesus, taunting him to save himself if he is really a king. They place an inscription over his head that is dripping with irony and that sends a chilling warning to anyone who would challenge imperial authority: “This is the king of the Jews” (Lk 23:38).

Neither the Roman occupiers nor the religious authorities recognized who Jesus really was, yet he extended the compassion of God even to those who failed to accept him and put him to death. In Luke’s Gospel, the first words of Jesus from the cross are a prayer for his persecutors: “Father, forgive them; for they do not know what they are doing” (23:34).

One of the criminals hanging beside Jesus presents a dying request that includes an astonishing declaration of faith: “Jesus, remember me when you come into your kingdom” (23:42). We aren’t told how he came to recognize Jesus as a king, but he is not unlike the sinners, the tax collectors, and the poor with whom Jesus identified throughout his life. Jesus declares that for this condemned man—and by extension, for all those on the margins—the kingdom is present even now: “Truly I tell you, today you will be with me in Paradise” (23:43).

Today’s reading from the Letter to the Colossians reminds us that this same Christ who lived and died among the poor and lowly of this world is himself “the image of the invisible God” (Col 1:15). He existed even before creation, and “in him all things in heaven and on earth were created, things visible and invisible” (1:16).

Just as Jesus welcomed into his kingdom a criminal with whom he was crucified, so has God “transferred us into the kingdom of his beloved Son” (1:13), a ruler who brings about forgiveness of sins and reconciliation to God. The same compassion that Jesus extended to others during his lifetime and even in his dying moments has also been extended to the entire universe. The author of Colossians writes that “through him God was pleased to reconcile to himself all things, whether on earth or in heaven, by making peace through the blood of his cross” (1:20).

Today’s celebration of the Reign of Christ reminds us that the One who “is before all things, and in [whom] all things hold together” (Col 1:17) has also come among us in the flesh to bring God’s mercy and love, especially to those most in need. His kingship is both universal and immediate, making him completely different from any human monarch. To live as citizens of Christ’s realm, we are called to acknowledge his sovereignty, to reorient our lives according to the example he has set, and to make known the coming of the kin-dom by acts of compassion.

A Hymn for Today: “O Christ, What Can It Mean for Us”

In this text, Benedictine sister and hymn writer Delores Dufner, OSB, FHS, reflects on the paradoxical nature of Christ’s kingship. He is, she writes, “a different kind of king.” Click here to hear a recording of organist David Cherwien leading the congregation of Mount Olive Lutheran Church (Minneapolis) in singing this powerful text to the tune ALL SAINTS NEW.

O Christ, what can it mean for us
To claim you as our king?
What royal face have you revealed
Whose praise the Church would sing?
Aspiring not to glory’s height,
To power, wealth, and fame,
You walked a diff’rent, lowly way,
Another’s will your aim.

You came, the image of our God,
To heal and to forgive,
To shed your blood for sinners’ sake
That we might rise and live.
To break the law of death you came,
The law of love to bring:
A diff’rent rule of righteousness,
A diff’rent kind of king.

Though some would make their greatness felt
And lord it over all,
You said the first must be the last
And service be our call.
O Christ, in workplace, church, and home
Let none to power cling;
For still, through us, you come to serve,
A diff’rent kind of king.

You chose a humble human form
And shunned the world’s renown;
You died for us upon a cross
With thorns your only crown.
But still, beyond the span of years,
Our glad hosannas ring,
For now at God’s right hand you reign,
A diff’rent kind of king.