A NEW SONG – Sixth Sunday of Easter, Year B 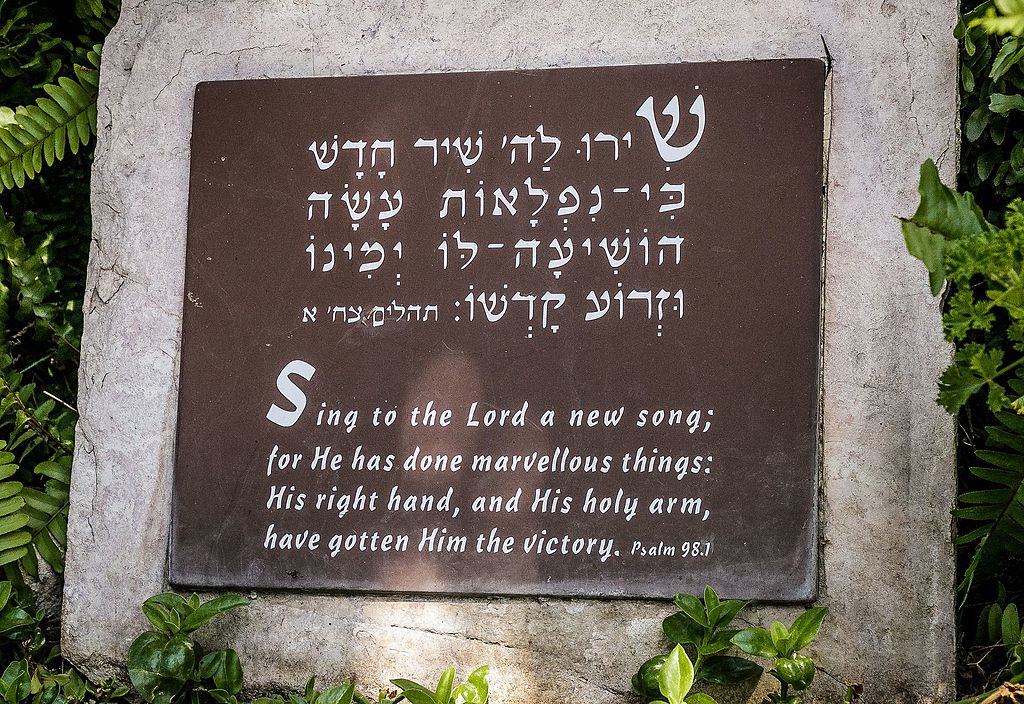 What does it mean for us to sing this jubilant psalm during the Easter season? Raising our voices in a “new song” suggests that the old songs just won’t do, at least not in the same old way, because the resurrection of Jesus has changed everything. The risen One has breathed his Spirit into the world, bursting open our enclaves, upending our assumptions, and challenging our customs. Surely all of that calls for a new song!

The psalmist invites us to sing a new song because of the “marvelous things” (Ps 98:1) that God has done. The first singers of this song were likely survivors rejoicing in their recent return from Babylon, recalling at the same time the Exodus of their people from Egypt in days of old. Their song proclaims the deliverance that God brought about for them in the sight of the nations—the kind of victory that calls for major celebration. God’s praise must be sung with festive instruments not only within the confines of the Temple but even by the earth, the sea, and all their creatures, with waters roaring, hills singing, and floods clapping. This song isn’t just new—it’s showstopping.

Today’s reading from the Acts of the Apostles recounts another instance of God’s marvelous deeds following the resurrection of Jesus. A lot has happened in the lead-up to this brief passage. The Jerusalem community was struggling with the question of whether Gentiles could become Christians without first undergoing circumcision and observing Jewish dietary laws. Peter was guided by the Spirit to accept an invitation to the home of the Gentile Cornelius just after receiving a vision in which he is commanded—to his horror and over his objections—to eat foods that were forbidden under Jewish law. Peter’s protest is met with the response, “What God has made clean, you must not call profane” (Acts 10:15).

The Roman centurion Cornelius had also seen a vision in which he was told to send for Peter—a complete stranger lodged about 35 miles away. Gathering family and friends, Cornelius welcomed Peter and his companions and anxiously waited to hear God’s word. As in his previous sermons recorded in Acts, Peter proclaims the good news about the life, death, and resurrection of Jesus. He also acknowledges for the first time that he “should not call anyone profane or unclean“ (10:28). Indeed, he declares, “God shows no partiality” (10:34), but rather embraces people of every nation.

The passage we hear today from Acts begins at this point. Clearly the Holy Spirit has heard enough, interrupting the sermon and rushing upon the Gentiles gathered in that place. No interviews, no exams, no consultation with community leaders—and no circumcision. The Spirit short-circuits the controversy over Gentile converts and smashes any obstacles that human beings had been placing on their inclusion. Peter takes the hint, recognizing God’s marvelous deed in their midst: “Can anyone withhold the water for baptizing these people who have received the Holy Spirit just as we have?” (10:47) The disruptive power of the Holy Spirit breaks down barriers and overcomes division.

We sing a new song this Sunday not only because of marvelous deeds that God has done for returning exiles and Gentile converts. The Holy Spirit has been unleashed in the world and continues to challenge and smash barriers that humans create for others. As disciples of the risen One, we have been called to take an active role in stirring the flame for justice, inclusion, and equality.

In today’s Gospel reading Jesus reminds us of our deep, intimate connection to him and to his mission: “I do not call you servants any longer . . . but I have called you friends, because I have made known to you everything that I have heard from my Father” (Jn 15:15). Now we are to be like him by bearing fruit, listening for the movement of the Spirit in the world, loving one another, and sharing in the work of removing obstacles that exclude or hold people back.

This traditional Brazilian folk song was made popular outside Brazil by a Lutheran missionary in Argentina who created Spanish and English versions after hearing it at a conference. Based on Psalm 98, it celebrates God’s marvelous works through Christ and in the power of the Holy Spirit, even in the midst of poverty. Christians with economic privilege need to be aware of the original context of this song among the poor of Brazil and the profound hope that it expresses when incorporating it into their own worship. Click on the links to hear it sung in Portuguese or English. You may also hear this version in both languages sung by the Pro Musica Youth Chorale directed by William Chin.

Text of Psalm 98:1 from The Ecumenical Grail Psalter. Other Biblical citations from the New Revised Standard Version.