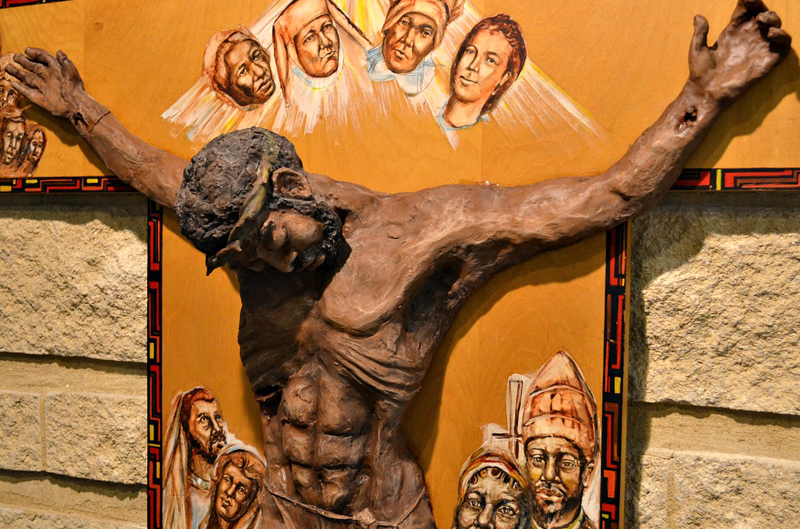 From the beginning of his ministry to the moment of his death, Jesus embraced his mission wholeheartedly and never wavered.

After his baptism at the Jordan and just as he was about to begin his ministry, the Spirit led Jesus into the wilderness to be tested. He could have chosen to satisfy his own needs by turning stones into bread—but instead he extended God’s compassion to others by providing them food, healing, welcome, and forgiveness. He could have claimed political authority over the nations—but instead he announced and inaugurated God’s reign in which leadership is characterized by service of others rather than by the power of empire. He could have shown off his relationship with God by hurling himself from the Temple—but instead he placed his life in God’s hands and staked it on the message and mission that he had been given.

Luke concludes his account of Jesus’ temptations by noting, “When the devil had finished every test, he departed from him until an opportune time” (Lk 4:13). That moment arrived as Jesus began his Passion. In Luke’s account of Jesus’ suffering and death that we hear today, we encounter the many ways in which Jesus remained faithful and obedient as he gave up his life for others.

The Ministry of Compassion. Throughout his life, Jesus acted compassionately by feeding the multitude, healing the sick, and casting out demons. He welcomed and even ate with sinners and tax collectors. Even as he faced abandonment and death, he continued extending to others the merciful love of God—healing the ear of the high priest’s slave, forgiving his executioners, and welcoming the repentant thief into Paradise.

Humility and Service. Before his Passion, Jesus entered Jerusalem in a royal procession, but one quite unlike the military parades staged by conquerors and rulers of empires riding on horses. The entrance of Jesus into the holy city evoked the prophet Zechariah’s vision of a servant-ruler who would put an end to wars and violence: “Lo, your king comes to you; triumphant and victorious is he, humble and riding on a donkey, on a colt, the foal of a donkey” (Zech 9:9).

The kingdom proclaimed by Jesus is characterized not by prestige and power but by humility and service. In Luke’s version of the Last Supper, immediately after Jesus had broken the bread and shared the cup, the disciples broke into a dispute about which of them was the greatest. This argument arose in response to Jesus’ comment that one of them would betray him. Their conversation quickly devolved from trying to figure out who among them could be a traitor to a heated debated about greatness.

Jesus intervened in their dispute: “The kings of the Gentiles lord it over them; and those in authority over them are called benefactors. But not so with you; rather, the greatest among you must become like the youngest, and the leader like one who serves” (Lk 22:25-26). Both Matthew and Mark place this incident at an earlier point in Jesus’ ministry. Luke, however, by including it in the Passion account and placing it in the context of the supper, emphasizes the intimate connection between the sacrificial death of Jesus and the self-emptying service required of those who would follow him.

Throughout Luke’s account of the Passion, Jesus remained steadfast in his allegiance to God’s reign above all else, including any earthly king. When he was questioned by Pilate and Herod, he refused to engage. While Pilate may have meant the inscription over the head of Jesus to be sarcastic, it proved to be far truer than he could have imagined. The repentant thief turned out to have greater insight than the religious leaders or the Roman executioners. He acknowledged the kingship of Jesus as he pleaded, “Jesus, remember me when you come into your kingdom” (Lk 23:42).

Trust in God. After the supper, Jesus walked to the Mount of Olives with his disciples and urged them, “Pray that you may not come into the time of trial” (Lk 22:40). As he now faced his own time of trial—his execution—he prayed earnestly, “Father, if you are willing, remove this cup from me; and yet, not my will but yours be done” (22:42). During his testing in the wilderness, the devil had urged Jesus to hurl himself from the highest point of the Temple, arguing that angels would come to rescue him. Now, as Jesus agonized and prayed in the garden, Luke tells us that an angel came not to rescue him, but to give him strength (22:43).

At various points in the Synoptic Gospels, Jesus calls us to follow him on the way of his cross. Although that journey will be different for each of us, Luke’s account of Jesus’ Passion gives us some guidance on how we can respond with faithfulness: attending to the needs of others with a compassionate heart, serving with humility, and trusting in God even in the face of opposition and ridicule.

A Hymn for Today: “You Are My Refuge, Faithful God”

In Luke’s account of the Passion, Jesus quotes Psalm 31:5 as his dying prayer: “Father, into your hands I commend my spirit.” That entire psalm is appointed for today in the Revised Common Lectionary. This paraphrase of Psalm 31 by hymn writer David Gambrell conveys the deep trust that Jesus expressed as he gave up his life. The sense of expectant trust in this text is heightened by its pairing with the tune MORNING SONG, which is most often associated with Advent.

You are my refuge, faithful God;
you shelter me from shame.
I put my spirit in your hands
and call upon your name.

Deliver me from hidden snares,
from sorrow, pain, and strife.
When troubles seem to smother me,
take heed, and save my life!

Be gracious, God, in my distress,
and dry my bitter tears.
My life is spent in misery;
I sigh away my years.

I am a wretched sight to see:
a broken, empty thing,
with only terror all around,
and deathly whispering.

And yet I trust in you, O God;
your covenant still stands.
Redeem me, in your faithful love:
my life is in your hands.