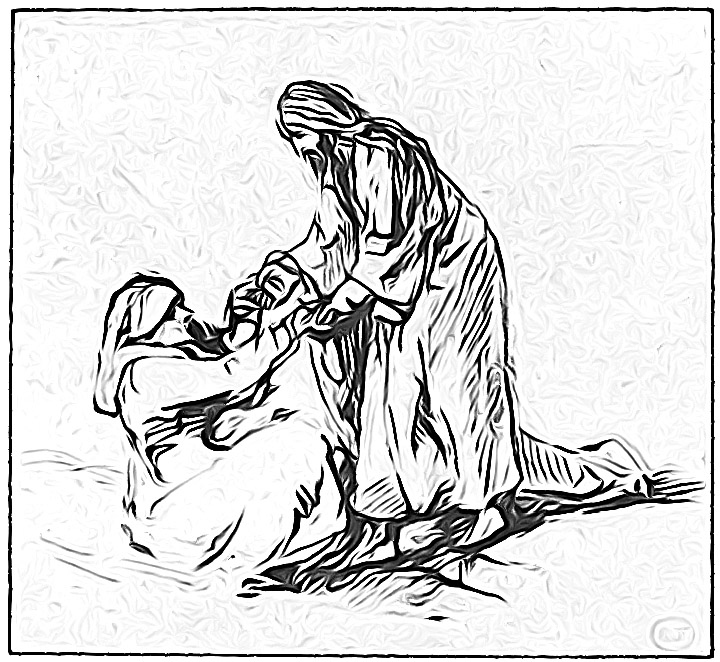 Mothers-in-law often get a bad rap, sometimes characterized as interfering or creating family problems, and frequently singled out in stand-up comedy routines. The episode in today’s Gospel reading featuring Simon’s mother-in-law, however, is no joke. Her brief encounter with Jesus, recounted in just three verses and often overlooked, turns out to be quite significant.

When we meet Peter’s mother-in-law, we are still in the first chapter of Mark’s Gospel, just twenty-eight verses from the beginning. Jesus has already covered a lot of ground—baptized by John at the Jordan, tempted by Satan in the desert, beginning his ministry, choosing his first disciples, teaching in the synagogue at Capernaum, and driving out an unclean spirit. And now, he and his four disciples enter the home of Simon and Andrew.

As soon as they arrive, Jesus is told that Simon’s mother-in-law is in bed with a fever. Just a short time earlier, he had cast out an unclean spirit with his word at the synagogue where he was teaching. Now, however, in the intimate setting of a home, Jesus reaches out his hand to bring healing with his touch. The Gospel writer tells us that he “took her by the hand and lifted her up” (1:31), employing the same Greek word that the angel uses when telling the women at the tomb that Jesus has been “raised” (16:6).

As soon as the fever left her, “she began to serve them” (1:31). At first glance this might seem like an eye-rolling moment—Jesus healing a woman so that she could wait on the men. In the context of the entire Gospel, however, the response of Peter’s mother-in-law offers a preview of one of its central teachings: Those who wish to follow must become servants in the image of Jesus himself, who “came not to be served but to serve, and to give his life as a ransom for many” (10:45).

In just three short verses, the story of Simon’s mother-in-law offers us some rich food for reflection. Just as she did, we may encounter Christ—even in a life-changing way—in the most ordinary of places. As she met God’s beloved Son and received his healing touch when Simon brought a stranger into their home, so might we experience his touch in unexpected or unnoticed people, places, or events.

Significantly, the home where Jesus extended his touch became a gathering place for others in need of his healing. Mark tells us that “the whole city was gathered around the door” (1:33) as those who were sick or possessed by demons sought him out. Surely Simon’s mother-in-law smiled in amazement at the realization that she was but the first to receive the healing touch of Jesus at their family home. Perhaps like her, we have the opportunity to provide the place or the occasion for others to receive this gift as well.

We may have experienced the healing of Jesus in various ways—in restored health, reconciled relationships, and forgiveness of our sins. As we have been “lifted up” like Simon’s mother-in-law, we are called to serve as she did—and as Jesus did—perhaps touching others and helping to bring them to wholeness.

A Hymn for Today: “O God, Whose Healing Power”

The cure of Simon’s mother-in-law and of the many people who gathered at their home to be healed by Jesus reminds us of the enormous needs we see around us, particularly as we recall the suffering of this past year on account of the coronavirus pandemic. This text by Lutheran hymn writer Herman G. Stuempfle, Jr. celebrates the healing love of God and provides an opportunity for congregations to remember all those who long for a touch that will lift them up.

O God, whose healing power
Is present everywhere,
Pervading all creation
With your eternal care:
Look now in your compassion
Upon this world of pain
And lives now bound and broken
Make free and whole again.

O Christ, who came among us
To heal the sick, the blind,
To bless the poor and burdened,
The broken heart to bind:
Send us where they are waiting
For hands to help and heal
And, through the gifts we offer,
Your grace again reveal.

O Spirit, holy, healing,
Descend to us today.
Restore to all creation
The peace for which we pray.
Redeem us from the powers
That ravage and destroy
Till earth and all its people
Shall greet the dawn with joy.