Pablo Sosa honored as Fellow by The Hymn Society 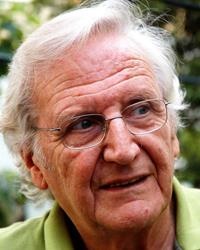 Pablo Sosa has been honored by The Hymn Society in the United States and Canada (THS) at its annual conference in St. Louis, Missouri, July 16, 2018, by being named a Fellow of The Hymn Society. This award, the highest honor given by the organization, was conferred because of Sosa’s work as a composer, professor, choral conductor, practitioner of church music, and advocate for the inclusion of global hymnody in the church’s song worldwide.

Born in Argentina in 1933, Sosa resides in Buenos Aires. A Methodist pastor, he studied theology at the Instituto Universitario ISEDET (Buenos Aires) and church music at Westminster Choir College (Princeton), the Hochsule für Musik (Berlin) and Union Theological Seminary’s School of Sacred Music (New York). Emeritus professor of Liturgy and Hymnology at ISEDET, he also taught Choral Conducting at the National State Conservatory in Buenos Aires for thirty years. In 1972 he founded the musical ensemble ‘Música para Todos, (Music for Everybody) directing and conducting it until 2003.

In his work composing songs, leading choirs, editing hymnals, producing religious broadcasts, and teaching liturgy and hymnology at a seminary, Sosa has been a tireless advocate for the inclusion of global hymnody in churches worldwide. He was a major contributor to Jesus Christ, the Life of the World (1983), the songbook of the 6th Assembly of the World Council of Churches in Vancouver and was one of its song enliveners. In 2003 GIA Publications edited Este es el Día / This is the Day, a CD and song-book with nineteen of his songs, and in 2007, Sosa, a member of the Global Praise Working Group, of the United Methodist Church, wrote Un Canto de Libertad (A Song of Freedom) a guide for the study of the missionary movement through its songs. A recording of 29 of his songs written in the last fifteen years is about to be released in Buenos Aires, with the participation of a number of distinguished Argentine musicians.

His friend and colleague, Andrew Donaldson, FHS (former worship consultant for the World Council of Churches) noted that “as the conductor of ‘Musica para todos’ Sosa worked to break down the cultural walls between ‘popular’ and ‘classical’ music, to make different genres of music accessible across cultural and denominational divides. Donaldson remarked that Sosa is a “restless intellect, always incorporating new ideas, putting on new lenses.” Donaldson noted that Sosa’s leadership at the WCC conference in 1983 was life changing for him because of Sosa’s passion and compassion with “insight into the culture, the joy, sorrow, and struggles of the community that produced the songs.”