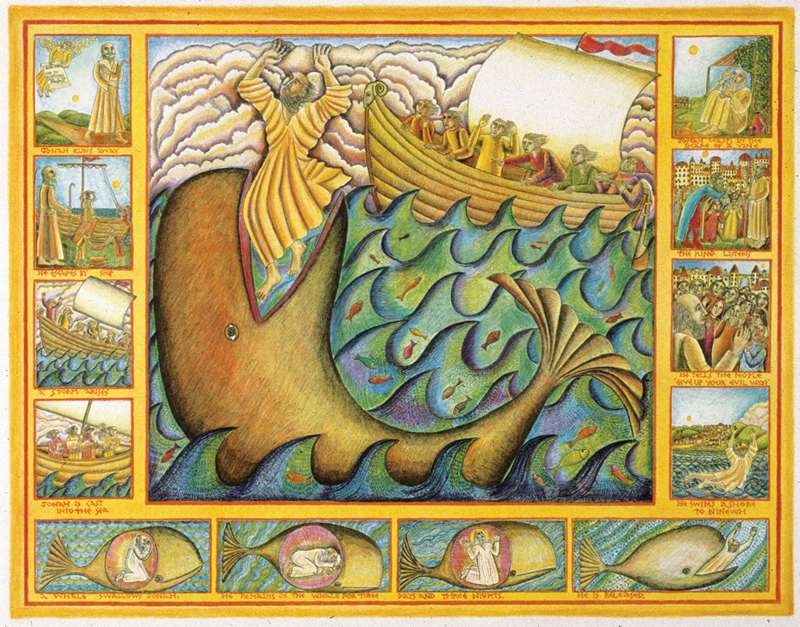 If one were to make a movie based on the book of Jonah, the title role would clearly need to be played by a “character actor”—no Denzel Washington, Tom Cruise, or Mario Lopez to portray someone as moody, resentful, and farcical as the fictional biblical prophet featured in today’s Hebrew Scripture reading. OK, maybe Tom Hanks.

Today’s Lectionary selection includes just a small portion of Jonah’s story, though an important one. By the time we meet our hapless hero, he has already fled from his call to announce God’s judgment on Nineveh. After all, he feared, people there might actually repent and avert the threatened punishment. His flight had led him to board a ship where his presence caused a dangerous storm. After being thrown overboard and spending three days in the belly of a large fish, Jonah was safely deposited on dry land. This is the point at which we pick up the story today, as the reluctant prophet receives the word of the Lord for a second time.

The audience for which this story was originally intended immediately understood Jonah’s reluctance to preach in Nineveh. Not only was it a foreign destination; it was also the capital city of the hated Assyrian Empire. Significantly, Jonah did not offer a message of repentance, but instead walked through the city announcing simply that the city would be destroyed in forty days’ time. Writing for a Jewish nation that had long spurned the prophets and ignored their call, the author of Jonah recounts that these foreigners not only believed but also repented, even though they had received no assurance of a reprieve. Just as Jonah had feared, the Holy One had a change of mind and decided not to carry out the threats made against the city.

The rest of the book follows the angry prophet as he pouts and sulks, complaining to God, “I knew that you are a gracious God and merciful, slow to anger, and abounding in steadfast love, and ready to relent from punishing” (Jon 4:2). The compassion of God gets the last word in this delightfully funny story with a serious message of divine love that extends even to hated foreigners.

In today’s reading from the Gospel of Mark, Jesus doesn’t merely speak the message of repentance; rather, he embodies and enacts the compassionate love that he has been sent to preach: “The time is fulfilled, and the kingdom of God has come near; repent, and believe in the good news” (Mk 1:15). Unlike the reluctant prophet Jonah, Jesus not only gives voice to the good news, but puts it into action as he gathers a group of disciples to join him in his mission.

Although the NRSV translates Jesus’ invitation to the first disciples, “I will make you fish for people,” the Greek text is more accurately translated, “I will make you fishers of people” (1:17). He invites them not just to fulfill a task, but to take on a new identity. Like those early followers of Jesus, we are being called not merely to complete an assignment but to become like Jesus himself—a living sign and embodiment of God’s saving love for all people, no matter who they are, where they come from, what language they speak, or whom they love.

In the story of Jonah, our lead character ultimately carried out the mission for which he was sent—yet failed to yield to the deeper meaning of his call. Today, as we hear Jesus inviting us to follow, let us also give ourselves over not just to shining the light, but to becoming the light that draws others to Christ.

A Hymn for Today: “Pescador de Hombres / Lord, You Have Come to the Lakeshore”

This text, based largely on today’s Gospel reading, is the most widely published of the many hymns written by the Spanish Roman Catholic priest, Cesáreo Gabaráin (1936-1991). It is known and loved throughout the Spanish-speaking world and appears also in nearly all major English-language hymnals published in recent years in the U.S. and Canada. Both the text and the gently rocking melody express the intimacy to which Jesus summons us and our generous response in accepting his call to follow and serve.

Tú has venido a la orilla,
no has buscado ni a sabios, ni a ricos,
tan solo quieres que yo te siga.

Lord, you have come to the lakeshore
looking neither for wealthy nor wise ones;
you only asked me to follow humbly.

Refrain
O Lord, with your eyes you have searched me,
and while smiling have spoken my name;
now my boat’s left on the shoreline behind me.
By your side I will seek other seas.

You know so well my possessions;
my boat carries no gold and no weapons;
you will find there my nets and labor. Refrain

You need my hands, full of caring,
through my labors to give others rest
and constant love that keeps on loving. Refrain

You, who have fished other oceans,
ever longed for by souls who are waiting,
my loving friend, as thus you called me. Refrain

Any cookies that may not be particularly necessary for the website to function and is used specifically to collect user personal data via analytics, ads, other embedded contents are termed as non-necessary cookies. It is mandatory to procure user consent prior to running these cookies on your website.