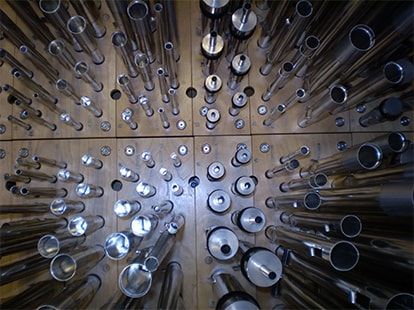 A major research project of The Hymn Society, the Dictionary of North American Hymnology was begun in 1956. Its goal is to index all hymnals published in North America; currently it indexes 4876 hymnals published between 1640 and 1978 for a total of over one million hymns. It is the largest database of its kind.

Over the years, DNAH (Di-nah) has moved from index cards to microfilm to CD-ROM to an online database. Begun by Leonard Ellinwood in Washington, D.C., DNAH’s editorial leadership moved to Mary Louise VanDyke at Oberlin College in 1984. Paul Powell served as senior editor for many years as the database was moved to CD-ROM format. In 2009, Bill Clemmons of Point Loma Nazarene University moved the data online in preparation for the merger with Hymnary.org. Tina Schneider now serves as editor of DNAH on the Hymnary.org board.

In 2008, Harry Plantinga of the non-profit Christian Classics Ethereal Library (CCEL) at Calvin College presented his new database, Hymnary.org, which is sponsored by the CCEL and the Calvin Institute of Christian Worship. Hymnary.org is similar to the Dictionary of North American Hymnology in that it attempts to create a searchable database of indexed hymnals. There are a few differences between these two databases: Hymnary.org focuses largely on publications that have come out more recently, where the DNAH stops its coverage in 1978; Hymnary.org includes publications from anywhere in the world, where the DNAH limits itself in name and practice to North America. The similarities, however, are substantial: both databases index many of the same fields, such as authors, first lines, place of publication, etc., and are of interest to scholars and practitioners alike.

After considerable discussion, Hymnary.org became the online home of the DNAH, creating a powerful database of hymnological information. Visit us at www.hymnary.org!