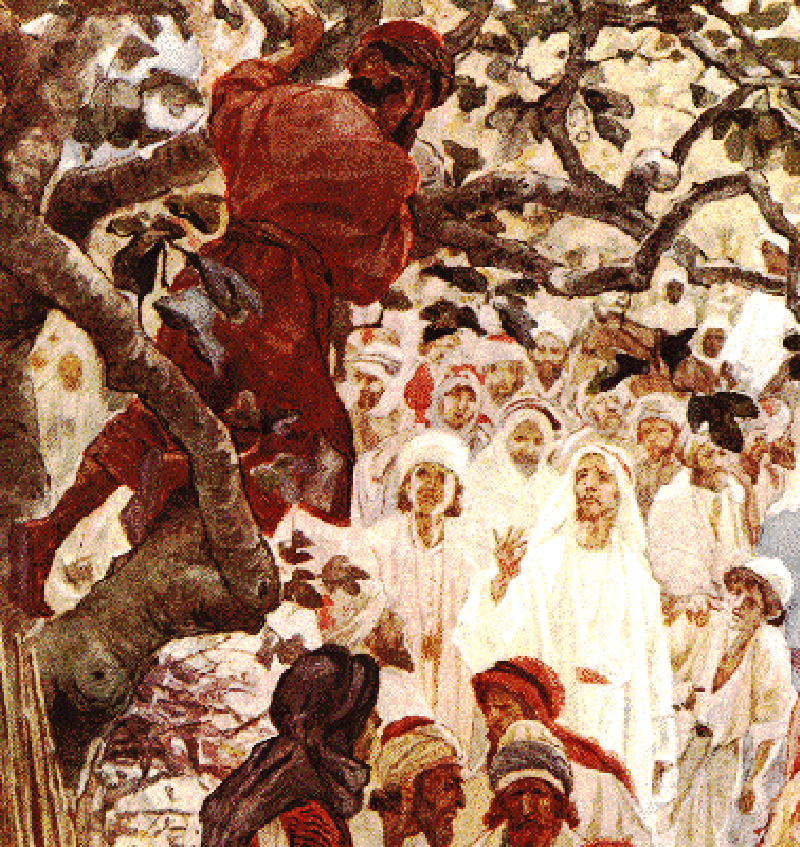 Since last November, the Sunday Lectionary has presented readings each week from the Gospel of Luke. During this year we have heard and reflected on the best-known of Jesus’ parables, including the good Samaritan and the prodigal son.

Luke alone also recounts some of the most beloved stories from Jesus’ life and ministry. Only in Luke do we find the Annunciation to Mary, the Visitation of Mary to Elizabeth, the birth of Jesus in Bethlehem, the announcement of that birth by angels to the shepherds, Jesus’ visit to Mary and Martha, his prayer of forgiveness for his executioners, and his words of reassurance to one of those with whom he was crucified.

Today we hear yet another incident that is unique to the Gospel of Luke. In ten short verses, Luke recounts one of the most charming stories in the entire New Testament that also pulls together important teachings that permeate his entire Gospel account.

In today’s Gospel reading, we meet the tax collector Zacchaeus, who was “short in stature” (Lk 19:3), someone accustomed to being treated as different and looked down on. Most of us can probably relate to the experience of being made to feel less than or of being treated as the object of ridicule. As a young gay kid, I certainly felt that sense of vulnerability, but unlike Zacchaeus, I could hide behind the closet door.

When he hears that Jesus would be coming through, Zacchaeus decides that rather than being left out, he would run ahead and climb a sycamore tree, where he could catch a glimpse. As Jesus passed by, rather than looking down on Zacchaeus as people had done his entire life, he instead looked up at him in that tree. Not only did he accept Zacchaeus just as he was, but he sought him out, calling him by name. Anyone who’s ever been overlooked in a pickup game can surely relate to the feeling that Zacchaeus must have had.

Of course, Zacchaeus’ isolation involved much more than his stature. He wasn’t just a tax collector—he was the chief tax collector for the Jericho region. He was among the most despised persons in town—colluding with the hated Romans and treating his own people dishonestly in order to enrich himself. Jesus looked past all of that as well, inviting himself to stay at Zacchaeus’ home. As might be expected, the bystanders began to grumble, “He has gone to be the guest of one who is a sinner” (19:7).

Jesus replied to their criticism by restating an overarching theme of Luke’s Gospel, that “the Son of Man came to seek out and to save the lost” (19:10). If they had been paying attention, they might have recalled that Jesus was constantly talking and acting in favor of those who were lost, last, and least. Remember his parables of the lost sheep, the lost coin, and the lost son? Had they not heard about his many dinners with others who were regarded as sinners? Jesus clearly relished his relationships with those regarded by others as outcasts—and he told stories about people who threw parties to celebrate finding the lost.

Zacchaeus was not only a short person regarded by the religious mainstream as a sinner—he was rich. Although Jesus frequently warned against the dangers of wealth, he sought out this rich man who likely had acquired much of his wealth dishonestly. Zacchaeus is changed by his encounter with Jesus, pledging to wipe out his holdings: “Look, half of my possessions, Lord, I will give to the poor; and if I have defrauded anyone of anything, I will pay back four times as much” (19:8). There wouldn’t be much if anything left of his wealth after fulfilling that promise.

Jesus did not wait for Zacchaeus to clean up his act before beginning the celebration. It was actually the other way around. Zacchaeus was transformed by meeting someone who looked up at this short man in a tree, called him by name, and invited himself to stay at his home. His conversion flowed from and was made possible by his encounter with Jesus. That pattern pretty well sums up the way that Luke presents the ministry of Jesus throughout the Gospel. Jesus extended the compassionate love of God lavishly and without preconditions—even to a short, dishonest rich man!

Just as he called Zacchaeus by name, so does Jesus reach out to us in our places of vulnerability, weakness, and sin. Moreover, he has passed on to us that generous, risky, over-the-top, and at times unseemly task of seeking out the outcast and the marginalized. In his words and actions, Jesus has taught us that discipleship is less about religious practice than about giving ourselves over to God’s way and God’s reign, seeking out the lost just as he did.

Paul expresses this important aspect of discipleship in this way: “All this is from God, who reconciled us to himself through Christ and has given us the ministry of reconciliation; that is, in Christ God was reconciling the world to himself, not counting their trespasses against them, and entrusting the message of reconciliation to us” (2 Cor 5:18-19).

A Hymn for Today: “Will You Come and Follow Me”

One of the most extraordinary aspects of today’s Gospel story is the way in which Jesus calls Zacchaeus by name in an encounter that would turn the tax collector’s life inside out. This hymn text, also called “The Summons,” was created by John Bell, FHS, and Graham Maule, both members of the Iona Community (Scotland). It reflects Bell’s vision for the community as “a place where the potentials of the socially marginalized as well as the socially successful would be attested.” In today’s Gospel story, we see how Jesus looked beyond Zacchaeus’ stature, wealth, and social standing—calling his name and inviting him to a life he could never have imagined.

John Bell arranged the traditional Scottish tune KELVINGROVE (named for a section of Glasgow) to be sung with this text. Click here to listen to a recording of this hymn, sung by the Cathedral Singers and conducted by John Bell.

Will your leave yourself behind
If I but call your name?
Will you care for cruel and kind
And never be the same?
Will your risk the hostile stare
Should your life attract or scare?
Will you let me answer prayer
In you and you in me?

Will you let the blinded see
If I but call your name?
Will you set the pris’ners free
And never be the same?
Will you kiss the leper clean,
And do such as this unseen,
And admit to what I mean
In you and you in me?

Will you love the “you” you hide
If I but call your name?
Will you quell the fear inside
And never be the same?
Will you use the faith you’ve found
To reshape the world around,
Through my sight and touch and sound
In you and you in me.

Lord, your summons echoes true
When you but call my name,
Let me turn and follow you
And never be the same.
In your company I’ll go
Where your love and footsteps show,
Thus I’ll move and live and grow
In you and you in me.