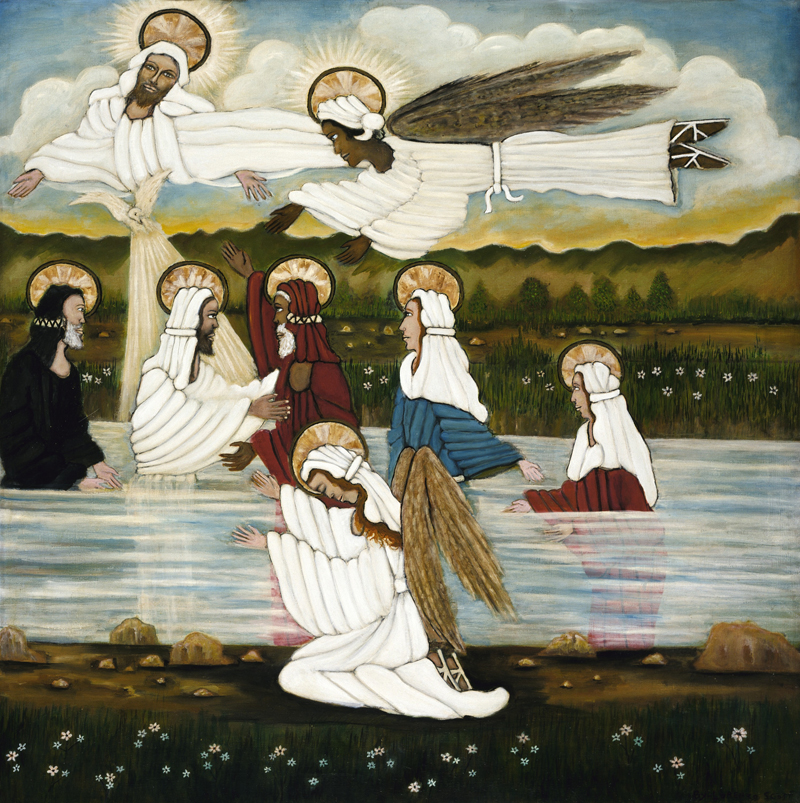 There is a dramatic scene in the film Romero that sheds light on the meaning of Christian baptism. In 1977, shortly after he had become the Archbishop of San Salvador in the troubled nation of El Salvador, Oscar Romero was asked by a wealthy friend to baptize her baby on a particular Sunday in December. He was delighted to be asked and remarked, “Wonderful, that’s a very popular time; there will be many people coming to be baptized.” She told him that she had been hoping for a private baptism, but Romero responded, “We don’t do that.”

That response stunned his friend. “You mean you want me to baptize my baby with a bunch of Indians?” she asked. When he indicated clearly that that was exactly what he meant, she said, “You have deserted us.” Romero, once a reliable ally of the wealthy elites, had now placed himself in solidarity with people on the margins, a stance that is inherent to baptism itself. in baptism we are joined to the body of Christ and thus to all its members.

In today’s Gospel story, there were also many people coming to be baptized. Luke describes the scene in this way: “Now when all the people were baptized, and when Jesus also had been baptized . . .” (Lk 3:21). Jesus was simply one among the crowd of those who came to John. Though sinless himself, Jesus was placing himself in solidarity with sinful humanity, joining the crowds in accepting John’s baptism of repentance.

Luke’s version of Jesus’ baptism is far less dramatic than Matthew’s or Mark’s. It is only after Jesus has already been baptized as part of the crowd and is at prayer, out of the public spotlight, that he receives the outpouring of the Holy Spirit and hears the voice from heaven. His identity as God’s Beloved is revealed in the context of his identification with others.

This solidarity with the lowly and with sinners would characterize Jesus’ entire ministry. In just two weeks we will hear this theme made explicit when at the synagogue in Nazareth he applies to himself the prophecy of Isaiah: “The Spirit of the Lord is upon me, because he has anointed me to bring good news to the poor. He has sent me to proclaim release to the captives and recovery of sight to the blind, to let the oppressed go free, to proclaim the year of the Lord’s favor” (Lk 4:18).

In our own baptism we too have been named as God’s beloved. Joined to Christ’s body, we share a deep bond not only with all the members of that body but also with the entire human family that he embraced in his life and ministry. Our lot is with those who lack privilege and power. With Christ we have received the mission to affirm all those who are God’s beloved and to take our place in the crowd, accompanying others in the journey to God’s kingdom.

A Hymn for Today: “Down Galilee’s Slow Roadways”

Although United Church of Canada minister Sylvia G. Dunstan, FHS, died in 1993 at the age of 38, she has left behind an astonishing collection of hymns that interpret Scripture with poetic beauty and spiritual depth. This hymn, based on the story of Jesus’ baptism, emphasizes his solidarity with others who had made the journey to the Jordan and celebrates our common experience of finding a roadway to God’s “hope and grace” at the font.

Down Galilee’s slow roadways
a stranger traveled on
from Nazareth to Jordan
to be baptized by John.
He went down to the waters
like soldier, scribe, and slave,
but there within the river
the sign was birth and grave.

Arising from the river
he saw the heavens torn;
it seemed the sky so open
revealed the Spirit’s form.
The holy dove descended
amid a glorious voice:
“You are my own beloved,
my child, my heart, my choice.”

We too have found a roadway;
it led us to this place.
We all have had to travel
in search of hope and grace.
But now beside the water
again a voice is heard.
“You are my own, my chosen,
beloved of your Lord.”

Six persons have been honored as Fellows of The Hymn Society in the United States and Canada for outstanding...