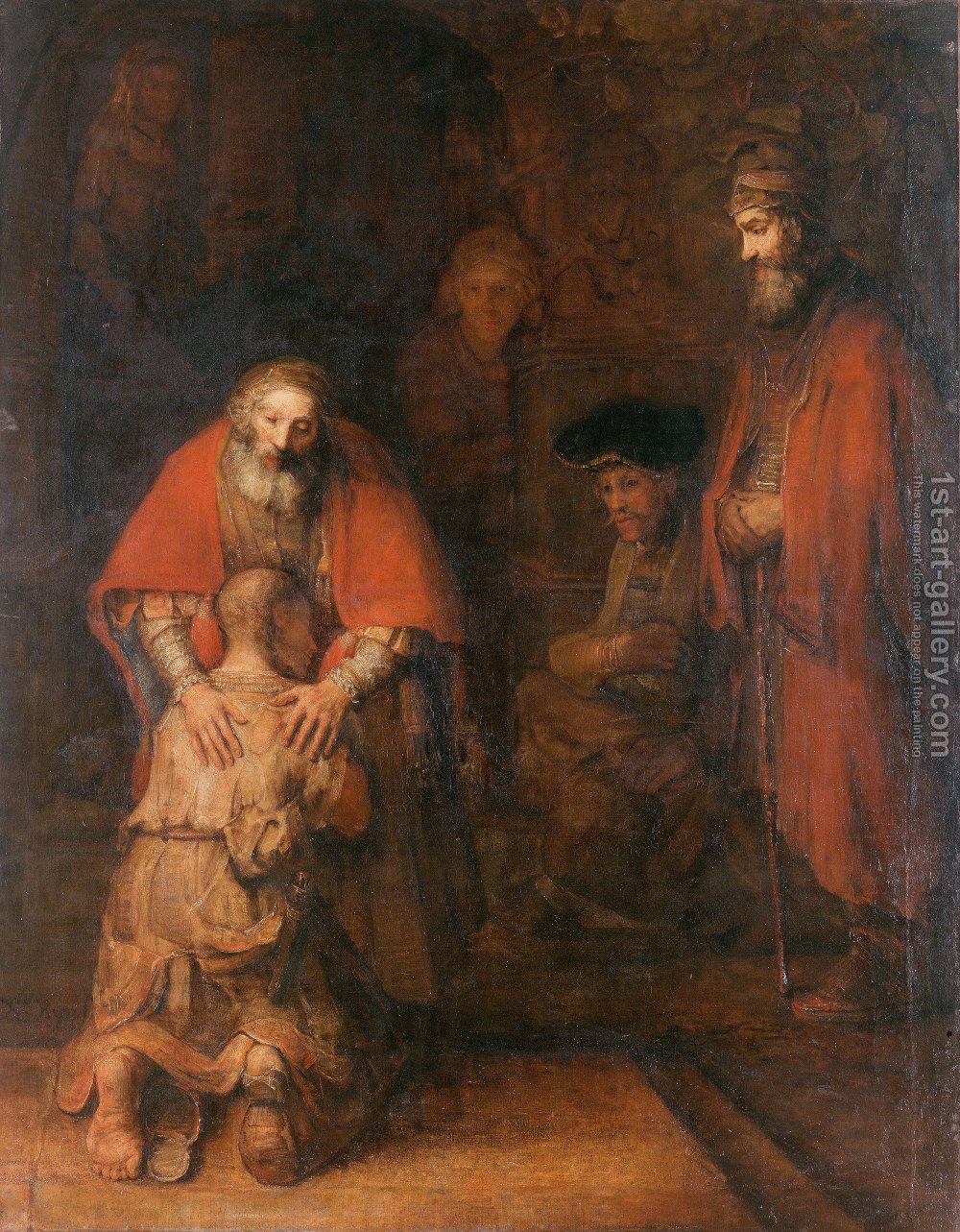 Grumbling is a favorite pastime for many of us—grumbling about weather, prices, work, politicians, relatives, other drivers and more, often with like-minded people who are complaining about the same things.

Grumbling sets the stage for the story we hear in today’s Gospel reading. The Pharisees and scribes are complaining about Jesus: “This fellow welcomes sinners and eats with them” (Lk 15:2). Shouldn’t a good religious leader be fostering proper observance of ritual and moral norms instead of hanging out with tax collectors and prostitutes?

In response to all this grumbling, Jesus tells three parables about things lost—a lost sheep, a lost coin, and a lost son. Today’s reading includes only the third story, by far the longest and most poignant of the three. It is popularly known as the Parable of the Prodigal Son but might be more appropriately called the Parable of the Compassionate Father, who is actually the central character of the story.

Throughout the parable, this wealthy landowner conducts himself in ways that are totally contrary to the culture of first century Jewish communities. First, he accedes to his younger son’s request to claim a share of the inheritance while he is still alive. Selling off lands not only jeopardized the family’s financial future but flew in the face of the deeply held belief that land was God’s gift to be treasured and preserved.

The younger son brought shame on his father by leaving the family home and squandering his inheritance. Surely the neighbors shook their heads in disbelief that the landowner allowed this to happen and then made no gesture to disown the son. Jesus portrays the father as impervious to gossip and shame, however, instead keeping vigil, waiting, hoping that perhaps someday the son would return.

When the son finally “came to himself” (15:17) and decided to head home with a well-rehearsed speech, the father saw him from a distance “and was filled with compassion” (15:20). Although the son knew that he had forfeited his birthright and was prepared to return as a hired hand, the father interrupted his speech before he could get it all out. Instead of hurling recriminations, the father presented him with a robe and a ring as symbols of his fully restored status as a son. The celebration that the father hastily organized and to which he invited the gossipy neighbors signaled to them that, far from disowning his son, he was overjoyed and wanted to share that joy.

When the older son catches wind of all that happened while he was working in the fields, he sulks outside and refuses to join in the celebration or even to enter the house. Once again, the father breaks with patriarchal expectations by going outside and pleading with his son. He shows his deeply compassionate heart even in the face of the older son’s self-righteous rant and disrespectful behavior. The father speaks with extraordinary love: “Son, you are always with me and all that is mine is yours” (15:31). The father was regaining his younger son, while the older son was losing nothing.

The father continues by explaining, “But we had to celebrate and rejoice, because this brother of yours was dead and has come to life; he was lost and has been found.” By concluding this set of three lost-and-found parables in this way, Jesus presents a challenge to the grumbling Pharisees and scribes and to all who regard themselves as faithful followers of God’s way. Does inclusion of the sinner, the outcast, or the stranger somehow threaten our place in God’s family? Will resentment and narrowmindedness hinder us from sharing the joy of welcoming them?

Today’s passage from Paul’s Second Letter to the Corinthians carries the challenge one step further. We are not only invited to share God’s joy in reclaiming the lost and forgotten, but we are also called to take an active role in God’s reconciling work in the world: “[I]n Christ God was reconciling the world to himself, not counting their trespasses against them, and entrusting the message of reconciliation to us. So we are ambassadors for Christ, since God is making his appeal through us” (2 Cor 5:19-20).

There’s no time for grumbling: we are to be like the compassionate father, seeking out the lost and making them at home in God’s family.

A Hymn for Today: “O Come unto the Lord / 어서 돌아오오”

This Korean poem by Pastor Young-taek Chun originally appeared in 1935 in the magazine The New Man and was set to music in 1943 by Pastor Chai-hoon Park, a prolific composer of hymn tunes. This tune is one of Pastor Park’s best known and loved musical settings. Since the text was translated into English by Steve S. Shim in 1976, it has appeared in many English-language hymnals. The hymn expresses the overflowing love of a God who desires nothing more than the return of those who may have wandered and who extends a heartfelt invitation to come home. You may hear this hymn sung in Korean here.

Refrain:
O come unto the Lord;
O come back to the Lord.

No matter how heavy
and how great your sins may be,
there are no sins that Christ our Savior
cannot bear, cannot accept.
The great depth of Jesus’ loving heart
is far deeper than the seas. Refrain

Our Savior is waiting
your return both night and day.
Jesus anxiously awaits you,
with door kept open wide,
as one who waits throughout the night
for a lost child to come back home. Refrain

No matter how burdened
and how beaten you may be,
the Lord will comfort you greatly
with hands that touch and heal.
Come unto Christ, who loves you so.
Please come home; please come back home. Refrain