THE CROWN – Passion/Palm Sunday, Year B; Palm Sunday of the Lord’s Passion, Year B (RC) 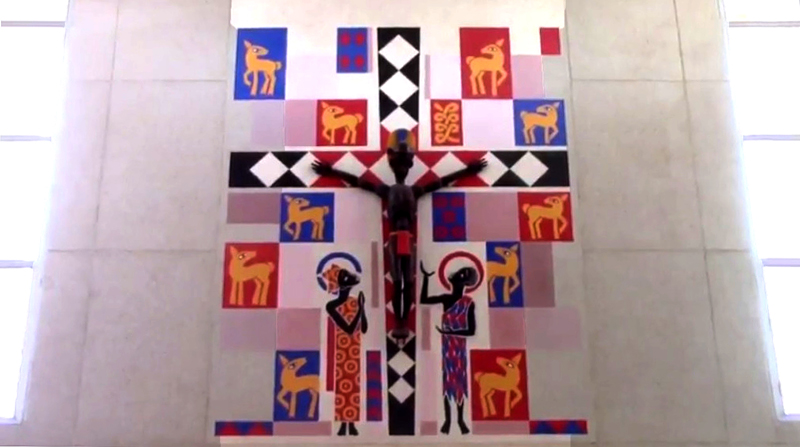 On this Sunday with two names—Palm and Passion—both readings from the Gospel of Mark portray Jesus as a king, but one quite unlike the Roman rulers of the first century or the European royalty of our time.

The Gospel of the Palms recounts Jesus’ carefully planned entrance into Jerusalem as the time was approaching for his execution at the hands of the Roman occupiers. He rides into the city in a manner that mocks the processions of military conquerors who used such spectacles to celebrate their subjugation of others by force. Instead, the details of this procession evoke the prophecy of Zechariah: “Rejoice greatly, O daughter Zion! Shout aloud, O daughter Jerusalem. Lo, your king comes to you: triumphant and victorious is he, humble and riding on a donkey, on a colt, the foal of a donkey” (Zech 9:9). This king comes not majestically, but humbly, bringing peace instead of warfare and violence.

All of Jesus’ preaching, teaching, and healing had been expressions of “the good news of God” that he had articulated at the outset of his ministry: “The time is fulfilled, and the kingdom of God has come near” (Mk 1:14-15). The “triumphal” entry of Jesus we hear about in today’s Gospel likewise signified “the coming kingdom of our ancestor David” (Mk 11:10), but in a deliberate act of non-violent resistance. This procession into the city was no sideshow or frivolous diversion; it was a deadly serious statement that stood in opposition to the religious authorities and parodied the Roman occupiers.

Fast forward to the second and much longer Gospel of the Passion that is also read today. The religious leaders arrived at their guilty verdict after the high priest asked Jesus point blank, “Are you the Messiah, the Son of the Blessed One?” (14:61) Jesus’ unambiguous response, “I am,” evoked the unspoken name of God revealed to Moses in the burning bush and dared to suggest his identification with the God of Israel.

The Roman governor’s concerns are similar, though not identical, to those of the religious council that condemned Jesus. In light of the acclaim that he received from the crowd, Pilate’s first question to Jesus is striking indeed: “Are you the King of the Jews?” (15:2). The details of his execution leave no doubt that the Romans would tolerate no claims to kingship. The soldiers mocked him by dressing him in a purple cloak, placing a crown of thorns on his head, and saluting him as a “king.” A sign was prepared for all to see at the place of crucifixion that read, “The King of the Jews.”

While it was Roman power that put Jesus to death, it was also a Roman—a Gentile non-believer—who was the first person in the entire Gospel to acknowledge publicly Jesus’ true identity. The Gospel writer is careful to point out that the centurion standing near the cross “stood facing him” as Jesus breathed his last. As he witnessed the death of Jesus, it was this representative of Roman military power who declared, “Truly this man was God’s Son!” (15:39)

The death of Jesus has shown the world what the sovereignty of God looks like. God comes among us as a companion to all those who suffer, especially those who experience injustice at the hands of the powerful. On the cross Jesus reveals the nature of his messiahship in the giving of his very life. His death is an act of service, an expression of solidarity with those whose lives are threatened and snatched away: “For the Son of Man came not to be served but to serve, and to give his life as a ransom for many” (10:45).

In The Cross and the Lynching Tree, theologian James Cone has explored ways in which the cross has stood as a symbol of God’s identification with the suffering of African Americans from the time of enslavement and as a sign of hope for the future. At the same time, he shows how the cross “is not good news for the powerful, for those who are comfortable with the way things are, or for anyone whose understanding of religion is aligned with power” (156).

As we remember the entrance of Jesus into Jerusalem and retell the story of his passion and death, we acclaim him as the suffering servant-king. We are called to stand facing the cross, looking at the lifeless body of the crucified one, and profess, “Truly this was God’s Son!”

By dying Jesus has manifested God’s rule that is good news for the suffering and the poor and a challenge to the powerful, the wealthy, and the privileged. To be a disciple of Jesus requires embracing his spirit of service, his identification with those who are marginalized, and his willingness to pour out his very life out of love for others.

A Hymn for Today: “Ride On! Ride On in Majesty”

This hymn by Anglican cleric Henry Hart Milman (1791-1868) was published in 1827 and has appeared in more than 450 hymnals, making it one of the most widely known hymns in English for Palm Sunday. For churches that celebrate both the triumphal entry and the passion of Jesus on this Sunday, this text offers royal imagery as a way of understanding both of these events.

Ride on! ride on in majesty!
Hark! all the tribes hosanna cry;
thy humble beast pursues its road
with palms and garments strowed.

Ride on! ride on in majesty!
In lowly pomp ride on to die;
O Christ, thy triumphs now begin
o’er captive death and conquered sin.

Ride on! ride on in majesty!
The hosts of angels in the sky
look down with sad and wondering eyes
to see th’approaching sacrifice.

Ride on! ride on in majesty!
In lowly pomp ride on to die;
bow thy meek head to mortal pain;
then take, O God, thy power, and reign.