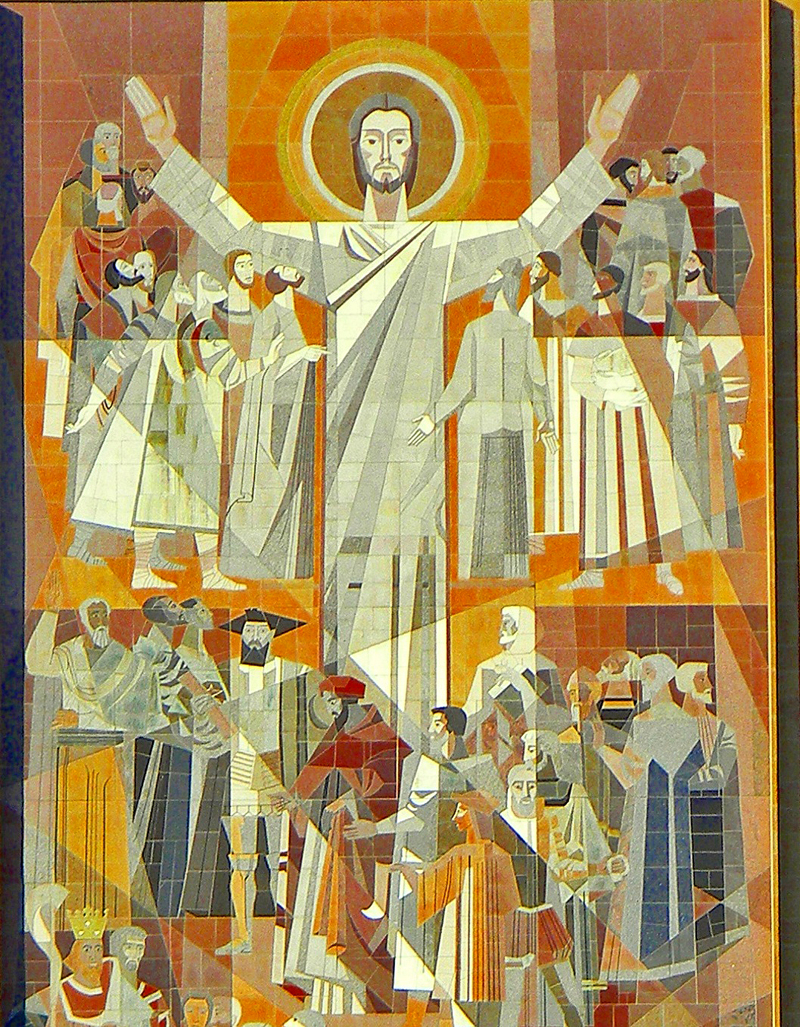 NOTE: Click here for a reflection on the Ascension of the Lord, which many communities observe on the Seventh Sunday of Easter.

During the past year of pandemic and isolation, I have done my share of binge watching on Netflix—Gracie and Frankie, Gentefied, Schitt’s Creek, Kim’s Convenience, and Crash Landing on You, just to mention a few. I’m guessing that I’m not the only one who turns wistful when a series finale is approaching. After becoming absorbed in one of these stories, I’m usually hopeful that all will turn out well for the characters who have become so familiar—and that they will live happily ever after.

Don’t we sometimes approach the Gospels in a similar way? It can be tempting to view the Jesus story like a telenovela that comes to a happy ending with the resurrection and ascension of Jesus. Death is conquered, the risen One sits at the right hand of God, and all is well. Roll credits.

That’s not quite the way that the story plays out in the Scriptures, however. In today’s Lectionary readings, transition is in the air. For the early community of disciples, the resurrection and ascension of Jesus represented not so much the closing of the Jesus story as the beginning of a new chapter in which the disciples would move from supporting to leading roles. How would the community relate to the world? How would it handle its burdensome but necessary organizational tasks?

Today’s reading from the Gospel of John presents a view of that transition from the perspective of Jesus. We hear a portion of what is often referred to as the high priestly prayer, which is placed at the end of the four-chapter account of Jesus’s words at the Last Supper. The disciples who were gathered with Jesus and all of us who hear these words today are more than eavesdroppers on this deeply heartfelt prayer of Jesus to his Abba. These words are intended for our ears too. They express his vision for where and how his followers will carry on following his death and resurrection.

This is the moment for which Jesus has been preparing his disciples during their journeys together, the time for sending them into the world. Jesus himself experienced hostility and recognized that the disciples too would be hated by the world. Yet in his prayer, Jesus clearly indicates that his followers are to live out their calling in the world. The disciples “do not belong to the world” (Jn 17:14) yet are called to carry out God’s saving mission in the world, just as Jesus did. Yes, the world can be a hostile place, but Jesus earlier in the Gospel declared to Nicodemus that “God so loved the world that he gave his only Son” (3:16). Indeed, “God did not send the Son into the world to condemn the world, but in order that the world might be saved through him” (3:17). Like Jesus and those first disciples, we are called to bear witness to God’s deep love for the world.

Today’s reading from the Acts of the Apostles provides another view of the transition that followed the resurrection and ascension of Jesus. After they had seen Jesus taken from their sight, the disciples are once again hunkered down in the upper room, but this time, as the risen One instructed them, to prepare for the gift of the Holy Spirit. During this time of waiting, the community embraces its new reality by choosing a replacement among the Twelve for the betrayer Judas Iscariot.

This story shows how the developing community of disciples, much like church communities today, must deal with the mundane tasks or organization. While the twenty-first century reader might be more likely to notice that they drew lots, the more important point is that the selection process was conducted in prayer, trusting God to guide.

It is striking that the two candidates–Matthias and Joseph, also called Barsabbas or Justus—are mentioned nowhere else in the New Testament. All we know about them is found in the passage we hear today. We can safely assume that they continued as did the other disciples to carry on the mission that would extend to the ends of the earth. The community’s organization and the selection of its leaders are portrayed here and throughout Acts as guided by the Holy Spirit and as serving the mission of preaching the Gospel.

A Hymn for Today: “Somos uno en Cristo / We Are One in Christ Jesus”

In the portion of the high priestly prayer that we hear in today’s Gospel reading, Jesus asks that his followers may be one. This Latin American folk hymn is based on another text about unity, Ephesians 4:4-6. Listen here.

We are one In Christ Jesus, all one body,
all one spirit, all together. (2x)

We share one God, one mighty Lord,
one abiding faith, one binding love,
one single baptism, one Holy Comforter,
the Holy Spirit, uniting all.